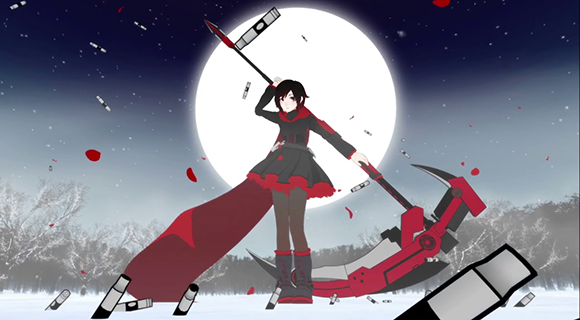 “The future-fantasy world of Remnant is filled with ravenous monsters, treacherous terrain, and more villains than you can shake a sniper-scythe at. Fortunately, Beacon Academy is training Huntsmen and Huntresses to battle the evils of the world, and Ruby, Weiss, Blake, and Yang are ready for their first day of class.”
-Rooster Teeth

The plot is centered around the four members of Team RWBY - Ruby Rose, Weiss Schnee, Blake Belladonna, and Yang Xiao Long. The series begins as they meet and start their training at Beacon Academy while they prepare to become Huntsmen and Huntresses and protect their world from various threats, the most pressing of which being the monsters called Creatures of Grimm which threaten their realm.

They meet many allies while they attend school, including their classmates, students from other schools, and even members of foreign militaries. They also foil the plots of villains, but as the series goes on, the girls begin to realize that the threats they have been dealing with are part of a much larger conspiracy.

As the stakes grow larger, Team RWBY must also confront their own demons: Weiss must balance her role as heiress of the Schnee Dust Company with her own beliefs, Blake is haunted by a dark past as a member of the White Fang, Yang searches for her mother, who disappeared while she was a child, and Ruby seems to have some great, unknown destiny waiting for her.

Saving the world is a lot for four teenage girls, and these four have plenty more to deal with.