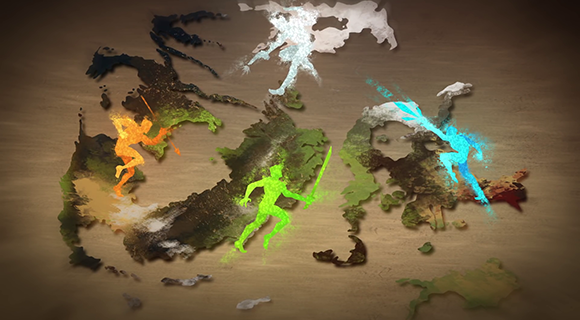 The early history of Remnant has been long forgotten; recollections are passed down in the form of myths and legends. The legend of the Maidens, holders of an immense power that is passed down from generation to generation, one for each season, is one. Another is of warriors with silver eyes who were feared by the Grimm and could strike down foes with a single look. Both are legends from early history, and over the course of RWBY, it seems that both are actually true.

Remnant is populated by two intelligent species - humans and faunus, a race of human-animal hybrids. Legend states that mankind was born from dust into a hostile world, forced to battle for survival against creatures of darkness known as Grimm. However, man discovered a power to help them combat the forces of darkness; they named it Dust, after that from which they were formed. With Dust, also known as “Nature’s Wrath,” mankind was able to turn the tide against the Grimm. They could build civilization and spread throughout the world. The mining of Dust would continue to be a major industry, leading to the rise of large enterprises such as the Schnee Dust Company.

However, with Grimm a menace contained, humanity began to turn against itself, spiralling into a series of self-destructive conflicts. Faunus and humans clashed as humans subjugated faunus, culminating in the Faunus Rights Revolution. And kingdom fought kingdom - the Great War, the largest of these conflicts, was fought with Mantle and Mistral on one side and Vacuo and Vale on the other, an argument about individualism on a worldwide scale.

In modern day, the conflicts have calmed, and Remnant enjoys an era of peace. Most people live within the four kingdoms: Mistral, Vale, Atlas, and Vacuo. Through a combination of human tenacity, technology, and natural barriers, the kingdoms survive and are regarded as safe havens for humanity. Small villages and nomadic communities do exist outside of the territories of the kingdoms, though they are far more susceptible to Grimm attacks. This serves to emphasize that Remnant is not a particularly welcoming world to humans and Faunus.

After the Great War, Huntsman Academies were created to train Hunstmen and Huntresses, warriors whose sole purpose was to combat the Grimm using a combination of powerful weapons, Aura, and Dust. In doing so, they protect those who cannot protect themselves from the dangers of Remnant. Beacon Academy, the main setting for most of RWBY, is one of these academies.

Although the world is said to be in an unprecedented state of peace, social issues threaten the status quo - racial tensions between the faunus and humans caused by continued prejudice, the immoral practices of the Schnee Dust Company, and the White Fang terrorist group all cause friction in society. The Grimm still thrive outside the four kingdoms, and mysterious groups plot to overthrow society as it is known. Remnant is reaching a tipping point; which way it will tip remains to be seen.