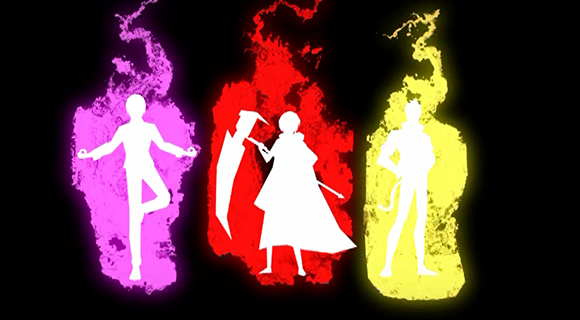 Aura is the manifestation of one’s soul, and can be used to command a number of abilities. The specific abilities and their strengths differ between individuals and rely on experience, training, and innate skill. A person with a strong aura may radiate bright colors when using it; because aura is the manifestation of the soul, it appears very differently from person to person.

Anything with a soul has an aura, including humans and faunus; recently, even a synthetic person with an aura has been created. Grimm, being soulless, are the only known form of life that does not have aura.

The strength of aura degrades with continual use. With time or heavy use, a person’s aura will decay to the point of them being weakened or incapacitated; a completely depleted aura is visually represented as a colored sheen passing along a person’s body, indicating that they are now more easily injured.

Skilled users of aura can create barriers or even amplify their abilities; weapons and armor can also act as a conduit for aura. Aura is a necessary energy source for all huntsmen and a powerful ally in battle. It’s also necessary to trigger the use of Dust. Aura is incredibly versatile. In terms of defense, users of aura will not be hurt as long as their aura is up, though they can still feel sensations such as pain and temperature. Offensively, aura can generate a powerful shockwave. Aura can also be used to unlock someone else’s aura, giving them some ability to use it, or to heal minor wounds.

Other specific abilities, known as Semblances, are unique to certain individuals. Semblance is the projection of aura into a more tangible form.