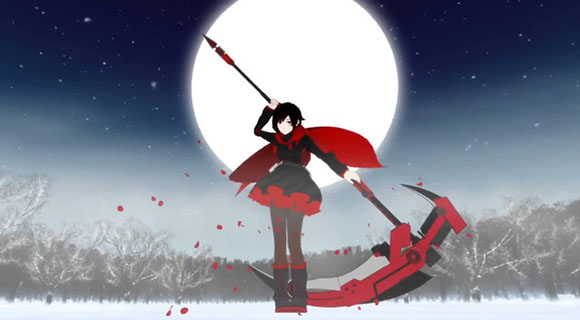 “As a girl, I wanted to be just like those heroes in the books… Someone who fought for what was right, and protected people who couldn’t protect themselves!”

Ruby Rose is the main protagonist of RWBY, and the leader of Team RWBY. Her weapon is Crescent Rose, a combination scythe and bolt-action sniper rifle, dubbed a high-caliber sniper-scythe. Ruby’s semblance allows her to move at speeds faster than the eye can follow at the cost of her aura, leaving trails of rose petals in her wake. Her silver eyes are also notable, and signify her lineage from a line of silver-eyed warriors that it’s said are so powerful even the Grimm fear them.

Ruby is the half-sister of her teammate Yang, and the youngest character in the series, accepted to Beacon Academy two years before the usual age of admittance due to her exceptional combat abilities. She has an innocent, “little sister” type personality, and has stated that she wants to become a huntress to be like the heroes in fairy tales, thinking that being that sort of hero is more romantic than being a police officer. She’s an honest person, but she has difficulty picking up on social cues and often misunderstands sarcasm. She’s uncomfortable with new people and in crowds, stating that learning about new weapons is “like meeting people, but better.” Despite her awkwardness, she cares deeply about people and has a strong instinct to help those in trouble.

In combat, she can be impulsive and battle-eager, not always pausing to learn about her opponents before attacking. However, she is also incredibly adaptable, allowing her to come out of difficult situations on top, and she learns to work well with her team as she spends more time with them, forming battle plans and sequestering her instances of recklessness to times when she is not with them.