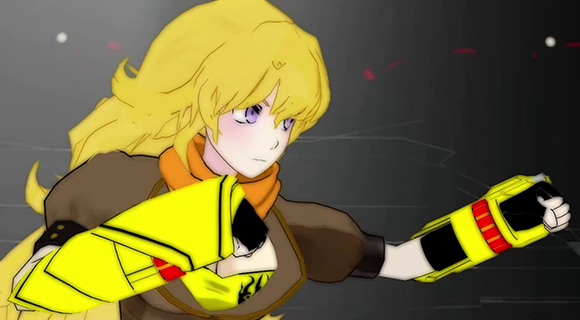 “I still want to know what happened to my mother and why she left me, but I will never let that search control me.”

Yang is one of the main protagonists of RWBY and Ruby Rose’s older half-sister. Her weapon is a pair of Dual Ranged Shot Gauntlets called Ember Celica, which work both to cover her knuckles while she punches and fire shots at her enemies for long-ranged attacks. When not in combat, they retract into bracelets around her wrists. Yang enrolled at Beacon Academy and became a member of Team RWBY at the beginning of the show. She became a huntress not to become a hero, but for the adventure, something different from most of her classmates.

Some of Yang’s creators described her as “the kind of person who would teach someone how to swim by pushing them in the water,” denoting Yang’s approach to most things in life; she is straightforward and confident. Yang is cheerful and energetic, and arguably the most carefree member of Team RWBY, balancing her partnership with Blake Belladonna who is more serious. She makes sarcastic comments and jokes even in the heat of battle and can take hostile situations extremely lightly when she is confident she faces foes she can beat easily. While she enjoys making puns, she has little tolerance for other people’s puns. Yang genuinely enjoys a fight, however she does take combat seriously when she deems her opponent a threat or if she is angered (usually if her opponent damages her hair). On multiple occasions, she treats fights like a game until her opponent manages to damage her hair, at which point she goes berserk.

Yang hates being bored, and she is eager to take part in recreational acts like food fights and board games; she even helps organize a dance at Beacon. She’s incredibly sociable and outgoing, the only one on the team who is actually skilled at making new friends. Yang is also extremely nurturing, particularly towards her younger sister, Ruby. She has a lot of faith in Ruby, but also worries greatly for her, Her protective and caring nature begins to extend to the rest of her team as well as she gets to know them, and she worries over Blake in particular as the show goes on.

Despite her fun-loving demeanor, Yang is deceptively mature. She shows sympathy for the faunus even before knowing Blake was one and questions people who make inappropriate statements. Like Blake, she is open about her beliefs, fighting with Weiss over faunus during season two. She’s incredibly insightful and offers thoughtful advice to her teammates, especially Blake. She’s driven and persistent when she wants to know something, searching for her mother over ten years after learning she left her at birth. However, Yang still has other issues; her anger is one of her main assets in battle, but it can also lead her to hold grudges, which distracts her in later confrontations.

In season four, Yang sinks into a deep depression after the loss of her right arm, the deaths of two of her friends and classmates, and the disappearance of Blake. She’s incredibly agitated by mention of Blake, and she refuses to wear the prosthetic her father got for her for months. She has flashbacks of being attacked by Blake’s ex from the White Fang and losing her arm, and she’s deeply traumatized by the event. However, she finally resolves to move on.

Yang’s semblance is special. She can use the energy from every blow she takes to make herself more powerful, even enough to shatter Atlesian military equipment in a few blows. However, she does take the full force of each attack, so quickly dealing lots of damage will still take her down. As combat becomes more intense or she becomes angry enough, fire appears around her hair; in the final state of her semblance, her eyes also turn red. Her hair glows because some of her power comes from her hair, and the glow is a sign that she’s charging power. Although it’s an incredibly powerful semblance, Yang is unable to power it up without taking damage first, and fighters well-versed in dodging attacks can frustrate Yang easily and make her added power useless.