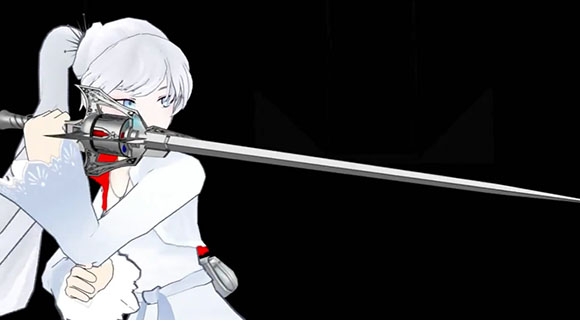 “My father was not the start of our name, and I refuse to let him be the end of it.”

Weiss Schnee is Ruby’s partner and the second member of Team RWBY. Her weapon is a Multi Action Dust Rapier, a sword capable of using the Dust in this universe, called Myrtenaster. Her semblance allows her to create glyphs with various effects, such as enhancing her speed, changing her trajectory midair, and dilating time. She is particularly skilled with Dust as an heiress to the Schnee Dust Company, and can even combine Dust with her semblance for additional effects. She enrolled in Beacon Academy against her father’s wishes, and joined Team RWBY somewhat reluctantly, but she has built a rapport with each member of the team after some difficulty connecting with them.

Everything has been decided for Weiss for her entire life; entering Beacon Academy is the first major decision Weiss makes for herself, and it shows. She has had a difficult childhood due to conflicts with her family’s company and the White Fang, and has been very lonely throughout her life. She has more difficulty making friends than even Ruby, but her awkwardness manifests itself very differently, causing people to perceive her as having a very “know-it-all” personality. That perception may not be entirely false, as Weiss is defensive and has great confidence in her knowledge and her abilities, but she also easily acknowledges her faults, working hard to overcome them to meet an expectation of being the best in everything she does. Overall, Weiss has a very serious personality, but she does not lack a more humorous side, as she participates in a food fight and tries to make jokes with her friends.

In battle, Weiss is analytical and tactical, the complete opposite of her partner. She remains calm and fights with precision, waiting for the right moment to strike and retreating when the circumstances do not favor her. Her motives for becoming a huntress are unclear even to herself, as she doubts her ties to the Schnee Dust Company. However, Weiss ultimately decides to continue on her own path, not one laid out for her by her father, though this will be difficult with the amount of control he exerts not just over her, but as the head of a large company.